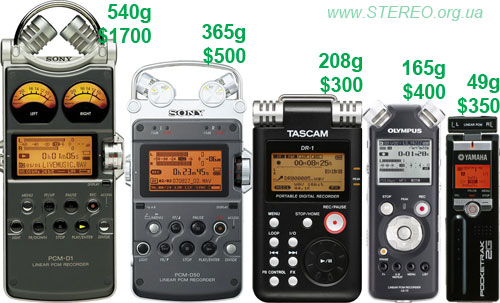 The lineup above may still seem surreal to many.

A decade of dominion by Sony’s MiniDisc over portable recording realm set a trend: If you need high quality audio recoding in the field – get MD!

So when Sony introduced Hi-MD with CD-quality PCM recording in 2004, MD followers proclaimed total rebirth of the format and predicted another decade of rein.

Appearance of one of the first solid-state portable recorders, Roland’s Edirol R-1 only reinforced certitude in MD’s power: R-1 was big, clumsy, inefficient on batteries, and very expensive in both main unit and additional storage flash memory prices.

Roland, however, came out with its updated Edirol R09, which is a hit to the day ($400 without memory cards). A bit less known maker M-Audio echoed Roland by cheaper MicroTrack 24/96. Still the market was deeply infant.

Only now, as flash memory prices dropped below $10/1GB any real development could take place. And it took.

No, Sony didn’t lower price for its gorgeous PCM-D1, it still sells for almost $2K. However, they stripped those fancy analog meters and announced the resulting PCM-D50 for only $500 (2nd on picture). Apparently it’s got everything from its big brother except the meters and the corresponding 6oz. of weight. It features:

Sony, founder of the niche of portable recording (all started rolling with the invention DAT, predecessor to MD) was very timely having offered a more affordable unit as a number of unexpected players entered the field.

Tascam has been known for rack MD and other recorders. Now it expanded into portables realm. Tascam DR-1 (center on pic) looks very nice:

Built-in unswappable battery, the only notable disadvantage of Tascam DR-1, was likely the cause for price dumping. (BTW MicroTrack costs same $300 and features same battery drawback. Looks like internal Li-Ion is a big no-no in pro world.)

Olympus, tainted by its involvement in trendy dictaphone market (as a byproduct having marred everything-flash when related to HQ Audio), gave absolute surprise. Olympus LS-10 Linear PCM Recorder (next to last on picture) is SO different from those silver sticks:

Still, the presence of WMA recording option tarnishes the developing image a bit. And a price tag of $400 is somewhat high for a market newcomer.

Now, is there somebody out there wishing to buy the latest model of a Hi-MD recorder?