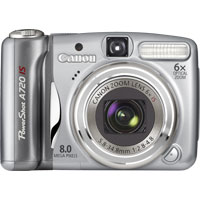 Canon PowerShot A710 IS digicam being arguably the most (outwardly) cool compact yet usable digital camera in Canon’s A series is now “updated” in the product line-up by 0.9 megapixel + Face Detection upgrade A720 IS.

But with the very minor upgrade we are faced with definite downgrades from A710’s advantages.

As you see, Pros are numerous, but smallish, Cons are few, but HUGE. And that kinda justifies the prices for last-in-stocks A710’s soared to $350 these days.

Other Canon’s new for 2007 point-and-shooter’s include PowerShot A650 IS, SX100 IS ang G9 with notable innovations being: