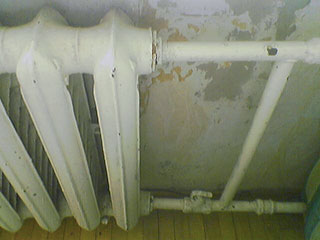 The last cold winter (probably coldest in the last 10 years!) provoked installation of a new radiator for this season. One of the issues about installation was pipe configuration.

The original pipe configuration provided for a by-pass in which water flow could not be cut (i.e. it had no valve) and a single side pipe-to-radiator attachment. As you can see the old system is pretty much simplified in this manner. 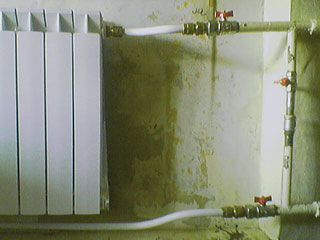 During new radiator installation I asked pipefitter to connect it “diagonally” and to fit a valve into bypass pipe, so that I wouldn’t loose heat through bypass in times of extreme cold. He did so.

Diagonal attachment is such that the return pipe comes out off the radiator on the opposite side than the incoming one. Presumably it forces more uniform water flow through all the sections, while with the traditional pipe attachment water is believed to have stronger circulation in sections closer to pipes. This is especially topical with large radiators (12+ sections).

Watch the return pipe going below the radiator in the pictures. 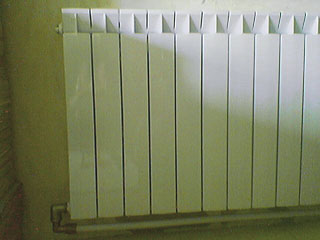 Actually it wasn’t my idea, I was advised on that by quite a few people.

Now that everything is connected and the heating season has began, I started to think if all those “innovations” (diagonal attachment & valve-into-bypass fitting) were really needed.

The pipefitter told me the water in our house’ heating system runs by itself with no pump employed. As I understand it, all the radiators in the building including my new one participate in pushing water down the piping by cooling it off. Therefore, each radiator section – from left to right – draws it’s own water stream and very likely doesn’t benefit from diagonal pipe attachment. Actually I see how such attachment may benefit heat transfer in pumped systems – the further sections are from the pipes, the more resistance water in them gets, hence less fresh hot water is supplied to them and they end up relatively cooler during use. But in my house’ case it is now not so obvious that the extra piping and fittings wasted for diagonal attachment are of any significance.

Further, as radiator cools water much more efficiently than by-pass pipe, it probably draws water more notably, hence the impact of the bypass valve on the heat transfer rate is really negligible. I mean the heat loss through by-pass is likely very small, and again was probably not worth extra valve fitting.

However, since my new bimetal radiator is possibly the most powerful heat consumer in the building’s system, it’s hypothetically going to contribute largerly to the total water circulation draught. If that is true, the simple unblockable by-pass may diminish radiator’s contribution into water circulation by feedback (reverse flow of the water cooled in the radiator back to the radiator’s input.) This justifies troubles with by-pass re-design. Additionally, the diagonal pipe hookup will be definitely of benefit would they decide to install a pump in the future.
Thus, next year when I’m going to install couple more super powerful radiators, I’ll probably do them same way.

Well, I’m almost content now: unusual wormth is all around and extra features implemented are to pay for themselves for sure. Only would my neighbours a floor below remain happy, as the pipe going out of my new radiator down to their lodging feels pretty cool compared to the incoming one…